perfect is for losers 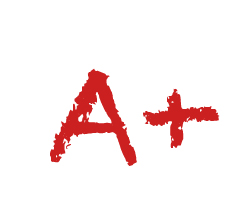 That quote, from Ramit Sethi, the author of the blog “I Will Teach You To Be Rich“, as well as the co-founder of PBwiki, made me laugh out loud when I read it the other day in Escape From Cubicle Nation. Not because I hate perfectionists – I have more perfectionist tendencies than I care to admit and some of my closest friends are perfectionists.  I laughed because it made the memories of all the times I didn’t do something because I was worried I wouldn’t be perfect at it.

Perfectionism can be the curse of creatives (as well as many others) and can stop us from producing our best work, or any work at all.  It becomes a very powerful mental roadblock to getting things done, to experimenting, and to freeing ourselves up to just letting things flow.

Crazy, I know!  But with that little gem that I just offered up, it kind of makes you think… “if nobody is perfect, why am I trying so hard to be?  What’s the worry?”

While on occasion perfectionism can be a positive thing it also hides two powerful negative behaviours:

Very few people will ever admit that they won’t start something because they’re afraid they’ll fail at it.  Perfectionists are good at coming up with other reasons for not starting so they don’t have to admit the truth to themselves or anyone else:

You get the idea.  My preferred method of choice is procrastination.  Oh yeah, I procrastinate from doing icky jobs but I also procrastinate because I’m afraid of not being good enough.  And I use the “we’ll look silly doing that” excuse as well… because… well… I don’t want to look silly falling on my butt in front of other people the first time I try something.  But it’s just another way of saying I don’t want to fail.

I have a friend who is writing a novel.  He’s spent the last 5 years working on it (that I know of) but last I’d seen, he’d barely made a dent in it.  He spent copious hours doing research and when he did start to write, he would get caught up in a passage, editing it and re-editing it and re-drafting and then he’d do it all again.  He was so fixated on getting a little section perfect that he never was able to actually get the entire story out into a rough draft.

How many half written manuscripts, half painted canvases, half written songs are floating around out there because somebody got so caught up in making them perfect that they were never able to finish?  What does it take for us perfectionists to finally say “hey, this is good enough.”

Now, I’m not endorsing mediocrity in any way and I don’t believe in settling.  But finishing something doesn’t mean you have to show it to the world.

don’t let the world pass you by

I don’t believe perfectionists are losers in the sense that they’re socially inept people or they will never amount to anything.  I think loser refers to the fact that by getting caught up in our perfectionist tendencies we literally lose out on opportunities and experiences.

A couple of years ago, I participated in NaNoWriMo (National Novel Writing Month).  It takes place every November.  The goal is to write a 50,000 word novel in 30 days.  Sounds impossible, right?  It’s not.  In fact, the sheer number of words that have to be written in 30 days leaves you zero time to get caught up in editing, redrafting, reseraching… all of that stuff that can cause a perfectionist to be rendered immobile.  Instead, you just spew it out, uncensored.  I did it because I was dared to.  And at the end, you have a nice neat manuscript that, is quite probably, going to be mostly garbage.  But who cares!?!  You just wrote a novel!!! And you finished it!!! It’s an amazing feeling.  And there is nothing to stop you from one day going back and editing away to your hearts content.  The important thing is you let all the mental stuff that would normally get in your way disappear.  No inner censor.  And nobody ever has to read it.  It was a fantastic exercise in letting go and worked wonders on me.

This is just one example of how you can kick the perfectionist monkey off your back.  There are loads of other things you can try.  If you’re a photographer, how about the very popular “Picture a Day” projects that are all over the web?  If you’re a designer, there is a “15 minute daily design” project out on the web.  And actually, that can be modifed to completing one creative act in 15 minutes if you’re not a designer:  a 15 minute painting, a 15 minute poem, a 15 minute song, a 15 minute jewellery or fashion sketch.

Whether you use any of your creations or not doesn’t matter.  The point is by doing it regularly and giving yourself a time limit, you force yourself to get past your perfectionism and just get on with the process of creating and letting yourself go with the flow of whatever strikes you in the moment.  And at the end of it, at the very least you will have a nice tidy stack of ideas that you can build upon later or turn into bigger projects – a great big sketchbook.  And I also suspect, as happened with me when I did the photo a day project, you will also improve your skills and push your creative boundaries in a way you wouldn’t otherwise.  And that is a good thing!