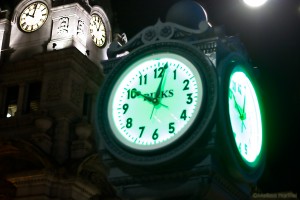 My idea behind working smarter is getting as much accomplished in the working hours I have, with as much focus as possible.  Not an easy task – one I’ll probably be working on for years to come.

a change of space

In January I left my full-time job in an office cubicle and traded it in for a home office.  While I love it, it has definitely been a change of pace.  The distractions are just as great as in an open plan office space, but they’re different.  For the first few months, I found I was easily being pulled away by family, friends, errands, and a very energetic lab puppy thrilled to have me home all day.

While  one of the reasons I was excited about working for myself was the ability to have flexibility in my schedule, I was finding that maybe I was being too flexible.  All my work was getting done, but I didn’t feel like I was being anywhere near as productive or as focused as I could be.

At the same time, I recognize that working from home, for myself, does give me a lot of freedom to adjust and tweak my work schedule to one that works for me – a freedom I would not have had in my previous jobs.  So why not take that freedom to experiment and see what works?

Recently, I read an article on working in concentrated periods of time and then taking breaks to move around, relax and refocus.  This is nothing new – I’ve been hearing that since being given high school study tips and it makes sense.

But at the same time, I skimmed a study in the newspaper (I can’t remember what study, sorry), on how our sedentary office jobs are damaging our health.  Again, nothing new but the twist to this study was that getting to the gym for an hour a day was not enough to offset this damage.  The human body is meant to be in constant motion.

Add to this a discussion I had with a colleague on his struggles with being more productive.  He mentioned a writer who had written his first book over a year working at least 8 hours a day.  With his second book he decided to take a different approach.  He would do 90 minutes of highly focused of work, 4 times a day.  In between those 90 minute parcels, he would go away from his office and do something completely different. His result?  He wrote his second book in a year but with fewer hours.  The difference?  The hours he did work were far more productive.

giving it a try

I decided to experiment with it.  Sam, my puppy, thinks that if I’m home, he should have my undivided attention at all times.  He’s a lab and lab puppies are go go go.  They only stop to sleep and eat.   They’re also very smart and as long as they’re engaged, they’ll behave.  Let them get bored and well… they make their own entertainment.  Usually it’s not Melissa approved.  Apparently, this continues till they get to be about three.  We’re two years and 2 months from that so we need a solution now.

The struggle I was having is I thought taking him for an hour long walk at lunch should be enough to get him through the day.  It wasn’t.   He’d fidget and whine and try to misbehave in the meantime and I’d spend half my time trying to get him to sit or lie down or be quiet.  I was constantly distracted.  When I got up to try and quiet him, I’d get pulled away to do something else.  Before I knew it, the day was gone and nothing had gotten done.  So I’d wind up working on the weekend or for extended periods at night.  What to do?

Instead of fighting it, I decided to work with it.  I’m trying the 90 minute strategy.  We have a run around for a few minutes before I start the work day, then he naps or plays with his ball while I work for 90 minutes.  Then we head outside for a good 15-30 minutes to play frisbee or catch.  He gets worn out, I get to clear my head and move around and get blood flowing.  When I come back in to do my next 90 minutes, it’s distraction free while he naps again.  When lunch hits, we play again for another 30 minutes, I eat, run errands and work for another 90 minutes.  Another play session and another 90 minutes.  After dinner, he gets his hour long walk, I relax for a bit  and then I usually put in another 90 minutes later in the evening before bed (actually my favourite time to work).

It seems to be working!  Obviously, we can’t do this every day.  Sometimes I have meetings or things come up but on the days where I know I’m going to be home all day, this is the schedule we follow.  And during those 90 minutes, I do my best, with my lists, to work really focused and get as much done as possible.  There are exceptions but for the most part, it feels more productive and less stressful and at the same time, more relaxed and enjoyable.

Time and Motion was only going to be a two part series but I think I will keep it running as I keep searching for ways to work smarter, avoid procrastination and keep balanced.  I’ll keep you all posted!